ENJOYING THE TYPICAL FOOD OF FUERTEVENTURA

Hello, my name is Jaqueline and I am a travel lover. During the trip, I like to have the possibility to know all the hidden places that I haven’t know yet. One of the things that I like to do is to go to the cinema. I am passionate by movies and I would like to see them in cinemas. Eating in a good restaurant would be a nice idea. I love cooking and taste different types of food, specially when the food is a traditional plate from the country.

If you are passionate about food, like to know the typical gastronomy when you are on holiday and want to enjoy a good climate, rest and beaches, Fuerteventura is your next destination.

In this post I will show you the typical meals of the island of Fuerteventura, with which just see the photos you will want to take a plane to taste for yourself.

If you want to taste these delicacies in one day and we show you the best of the gastronomy of the beautiful island do not hesitate to book a place on our tapas tour in Fuerteventura.

What do you need to know about the gastronomy of Fuerteventura?

The ancient inhabitants of the island of Fuerteventura, the Maxoratas who are known as Majos today, left a culinary legacy rich in fish, meat and a nutritious mass of toasted flour, known as gofio.

However, one of the most outstanding products of this land is its cheese, which is known as Quesos Majoreros or Maxoratas.

Below we have made a selection of typical Majorcan dishes and desserts, with which it will be almost impossible not to make your mouth water:

If you have ever been to Fuerteventura or are planning to visit soon, you will see that apart from the characteristic desert landscape of the island, there is also a rural landscape where you can see the abundant presence of a special animal: the goat. 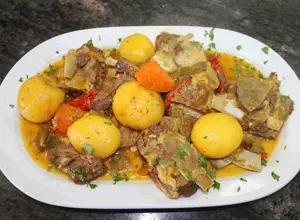 Goat meat is one of the star dishes of the typical Majorcan cuisine that you should try once you visit the island. This tasty dish is composed of: goat meat, onion, olive oil, carrots, potatoes, red pepper, red wine, salt, cumin and thyme.

You can also find this type of meat in the famous Puchero canario, similar to a stew.

This typical dish of the Canarian gastronomy can also be found among the typical food of Fuerteventura. The uniqueness of this dish, in the case of the island of Fuerteventura, is that instead of being prepared with chicken meat is made with goat or goat kid meat. 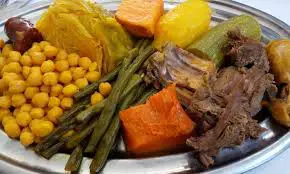 Therefore, the main ingredients are: roasted potatoes or sweet potatoes, carrots, pumpkins, chickpeas, corn, beans and chicken or goat (in the case of the puchero majorero).

Another ingredient that cannot be missing from the typical dishes of Majorcan gastronomy is fish and seafood.

Sancocho is a typical dish of roasted fish, with potatoes, sweet potato, gofio and spicy sauce. 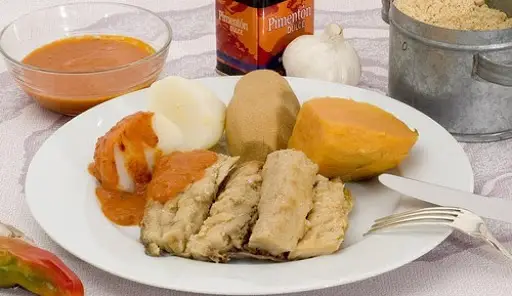 Each of the ingredients of this delicious dish are served separately, on one side the fish is served, without broth, and on the other side, the potatoes and sweet potatoes.

The gofio also has its own dish and the sauce is placed in recipient to be served to taste.

Pejines are a small fish similar to anchovies, which are served as starters in some restaurants where the main offer is products such as fish or seafood. This type of fish is served in portions and can be eaten whole, from head to tail, due to its small size. 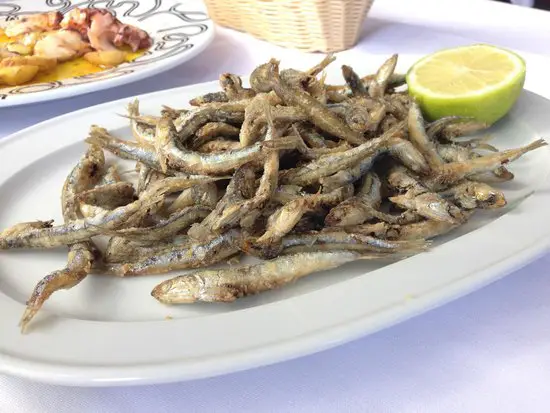 They can be grilled, fried or dried in the sun and can be accompanied by a squeeze of lemon.

This cheese was one of the first in the Canary Islands to obtain the recognition of Denomination of Origin and the first protected goat cheese in Spain.

To make this very special cheese, today, we follow the traditional recipe used by the Majorera aborigines, mixing raw or pasteurized Majorera goat’s milk with 15% of Canary Island sheep’s milk. 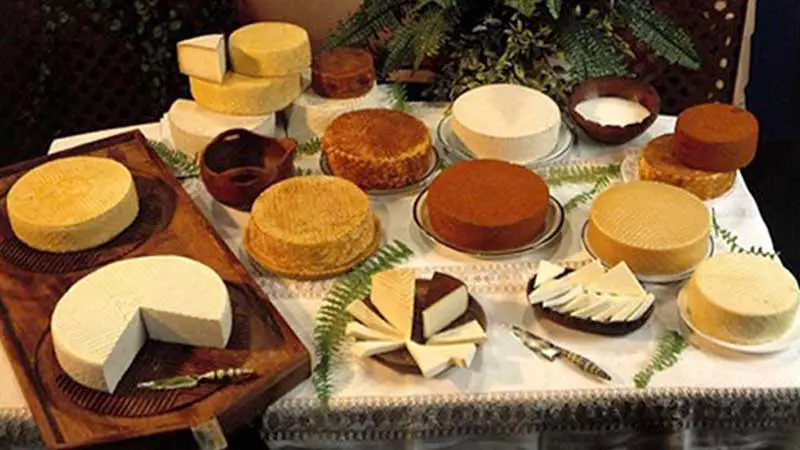 One of the characteristics of this cheese is that a palm leaf is used to mould the rind and base.

In addition, its surface can be of different colours depending on whether it has been rubbed with oil, gofio or paprika.

Inside, it is a yellowish-white cheese with a creamy or semi-hard texture. When it is cured it can have a spicier and stronger taste, but when it is fresh its taste is softer.

One of the typical dishes of the gastronomy of the Canary Islands is the wrinkled potatoes with green sauce or picón, and of course, it could not be missing in the typical food you will find in Fuerteventura.

This dish consists of boiled potatoes without removing the skin and adding lots of salt (especially sea salt) and adding mojo verde or mojo picón, a sauce made from peppers, garlic, salt, paprika, cumin or coriander, oil, vinegar, parsley, tomato, saffron and water. 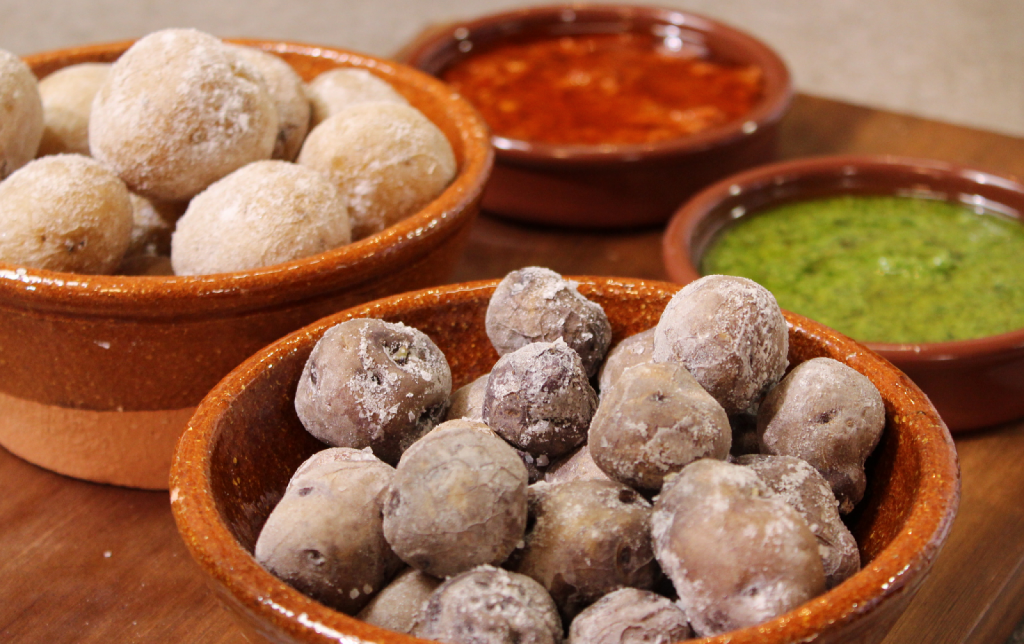 The potatoes used for this meal are a special type of potato grown only in the Canary Islands and known as papa bonita. They are also characterized by their small size, which makes it possible to eat them with your hands. 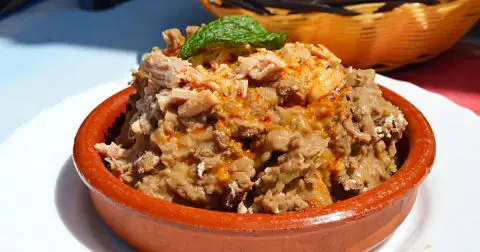 The main ingredient of this dish is wheat flour or roasted millet, which is what is known as Gofio. Red onion, chopped pork ribs, green or red mojo, mint and salt are usually added to the scalded.

Once you’ve tried the Majorero cheese and discovered its rich flavor, you can’t miss this exquisite dessert.

Buñuelos consist of a fried flour dough that can contain both a sweet and a salty filling and is an ideal dessert after a good meal. 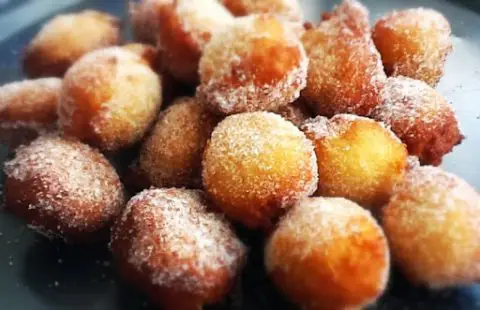 On the island of Fuerteventura are very typical buñuelos filled with majorero cheese, are made just like the traditional buñuelos, but inside you will find a delicious goat cheese.

For lovers of confectionery and especially biscuits I recommend trying the famous Bizcocho Majorero. 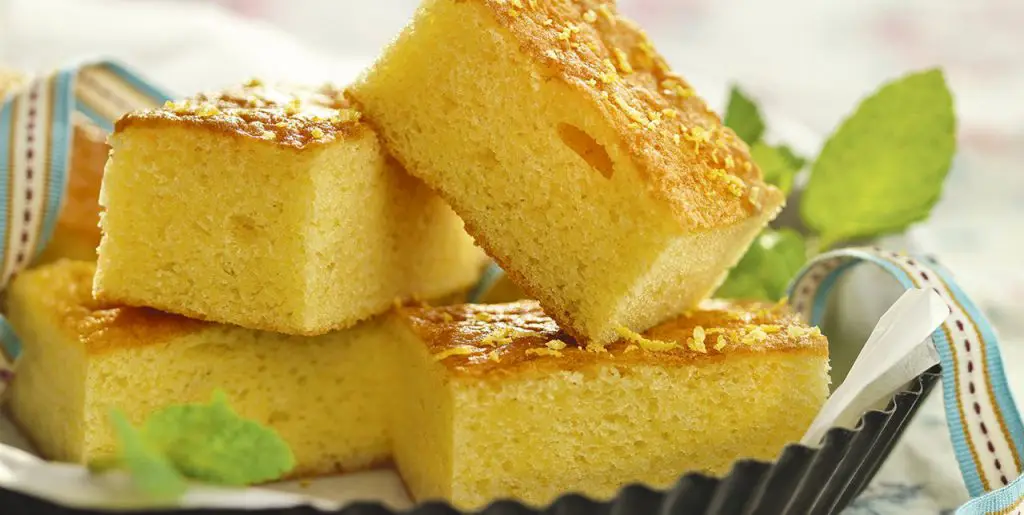 Its preparation is similar to that of traditional sponge cakes, however, instead of using normal flour, chickpea flour is used which gives it a unique and special touch.

Go to the CATALOGUE

Any cookies that may not be particularly necessary for the website to function and is used specifically to collect user personal data via analytics, ads, other embedded contents are termed as non-necessary cookies. It is mandatory to procure user consent prior to running these cookies on your website.